Solutions to the problem of Burning Banks

I get the question often “What are your solutions to fix the system?” and this is something I have researched and reflected on a great deal. So here are some of my solutions: 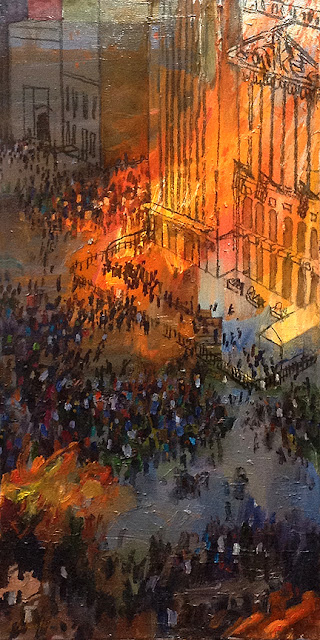 1) The first thing States and Cities can do is charter Public Banks to cut out the parasitic Too Big To Fail middle men Banks needlessly existing between Public Bond Measures and the Money to get projects done. The fact that Gavin Newsom signed Public Banks into law in California and Los Angeles has one in progress is mind blowing. The existing California iBank is being retooled for wider purpose, all incredible news! People at large do not yet realize what a game changer this. @EllenHBrown on twitter is an expert on this
2) There needs to be a UBI type system that sends money to every taxpaying American with a stipulation: if you have debt, the money has to go toward paying down that debt until it’s gone. If you don’t have debt you have money to spend into the economy however you please. It’s a system that helps both the borrower and the lender because the lenders get their money by way of the public paying down their debt and benefitting EVERYONE. No more Wall St bailouts that just go to the top of the system because we can see there is no “trickle down”, the bailouts have to go THROUGH the Public or they are pointless and actually detrimental. @ProfSteveKeen on twitter is an expert on this
3) The interest rate for all private debt in the form of mortgages, student loans, credit cards, and auto loans should be pegged to the Fed Funds rate which right now is .05%. Plus a lot of this Private Debt needs to be wiped out, it’s called Debt Jubilee and I propose from now on for every dollar that goes toward “bailing out” a Too Big To Fail Bank Parasite like Wells Fargo then a percentage amount of private debt should be cleared along with it. ALL private debt in America is $19 Trillion; much more money than that has been handed out to banks since 2008 but it’s always Heads they win, Tails the Public gets the shaft. @realMaxKeiser and @stacyherbert on twitter speak to this
4) We need government leaders who will stand up to the military industrial complex. I propose to set up an Infrastructure Army that kids leaving High School can join and get all the benefits of military service without the wars: get physically fit, create social bonds, learn skills and a trade, and get sent across the country to rebuild failing aged infrastructure and erect new and needed projects entering the future.
5) There also needs to be a renaissance and reindustrialization of the US. The era of “American” companies moving their factories to dictatorships and poor nations to exploit cheap labor has to end because if anything as we have learned from this pandemic it’s a National Security risk, but mainly because good paying jobs are part of what used to be the American Dream, not poverty level wages that are subsidized with 29% interest easy credit cards and qualifying for food stamps. It took a lot of money to build factories and move production to the cheapest source of labor, but it only long-term benefitted a small number of people at the top of the system; that is good money spent badly. It's going to cost a lot of money to reindustrialize the US today, but domestic spending is the type of spending we need right now.
What I see having happened is our leaders legislated themselves infinite money starting in 1971 and then they kept that fact to themselves while they told the public that we have to “raise the money” to spend on things the public wants. Bullshit. I’ve never heard our leaders say “We don’t have enough money, we must raise the money or we will to have to end these Wars all over the planet!” Nope. Infinite Money for Endless War. Infinite Bailouts for Endless Crime on Wall St. Using a God-Like power, Money Creation, to enslave people with private debt and at the same time using leveraged debt to “buy” the World, total insanity. The Public needs to take the Money Power back.
These points all seem to me to all be do-able solutions that would have a real benefit to the REAL ECONOMY and would be a return to balance and a feeling of fairness that would spread throughout the Nation in positive ways we can’t even imagine yet.
Posted by alex schaefer at 12:59 PM

This is very well said, Alex. I've been thinking about this a lot as well and I think you've done a great job of summarizing fantastic, practical solutions in a very concise way. If these things were implemented, we would see a new renaissance in America and a way of life that is far more peaceful. Thank you.

Hello Alex I love your work! Since you seem to display anti bank and central ownership, I wanted to ask if you would consider making these as NFT art? They are the craze rn but I am an NFT dealer that can explain this to you. I think this art could profit you well in the crypto world due to cryptos focus on individual ownership over big business. Let me know what you think and message me on Twitter @smokie_cow Amazing work and I look forward to hearing from you!