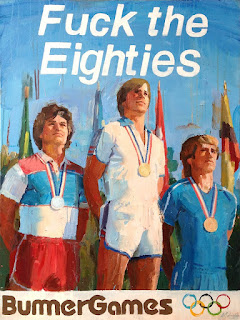 Seriously. Here's a painting from the series that was finished for the Charlie James show last month. This is a clothing ad from a 1984 Playboy magazine. What the hell were we thinking with those shorts? That's a lot of man-thigh. The three red white and blue medalists smacks of American Exceptionalism, an idea held by our political leaders that the USA is above the law; it's an attitude that over the years has done nothing but breed hatred for our arrogance. Here's a shot of the painting in progress and then the finished piece. As always, I try to continually work the entire canvas from the initial slap dash attack to the details. It makes it fun to do and look at! oil on canvas, 48 by 36
Posted by alex schaefer at 11:29 AM